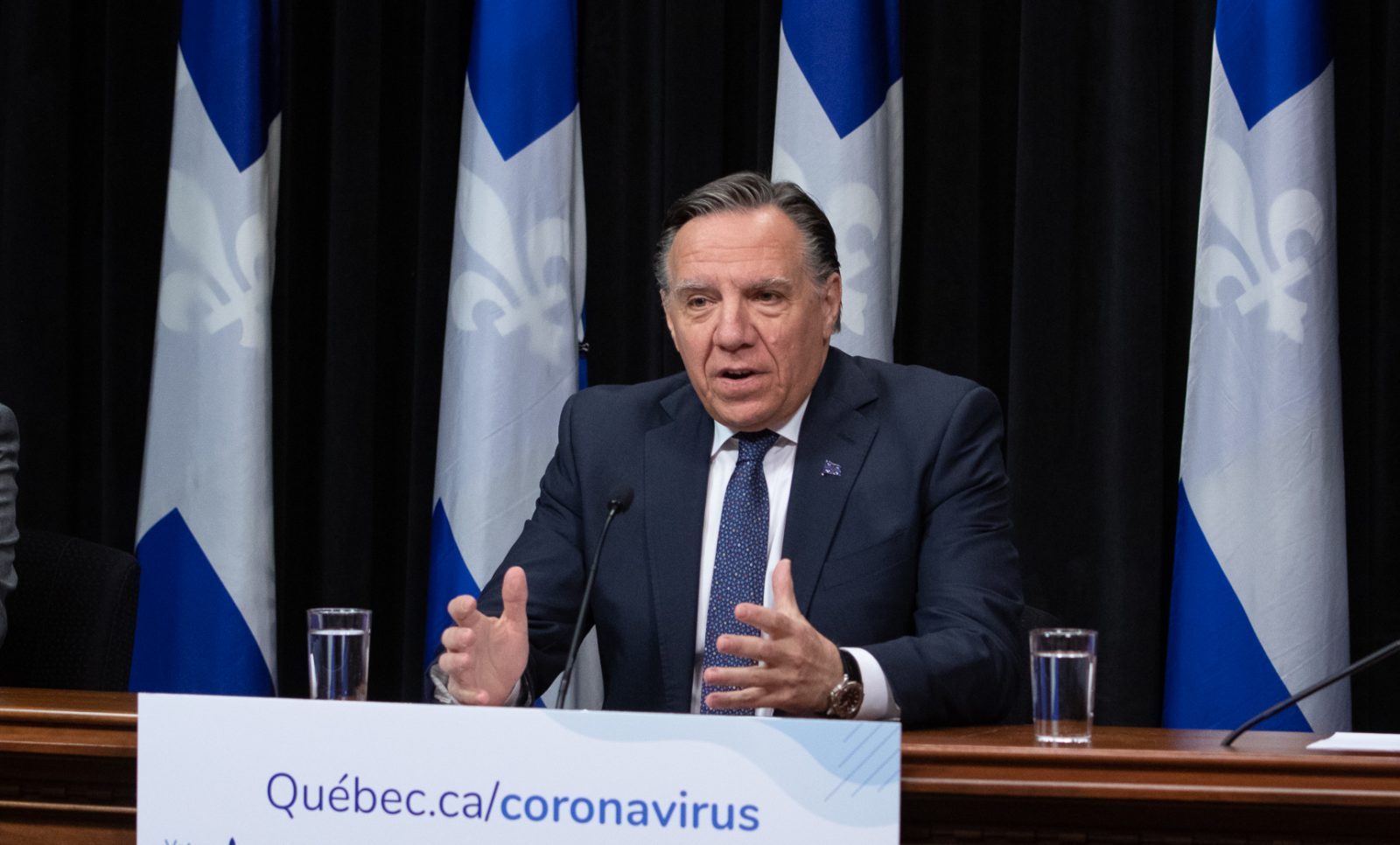 A coalition of Quebec business leaders has filed a lawsuit against Premier François Legault’s government, saying the province’s decision to continually extend its state of health emergency and impose widespread lockdown measures is unconstitutional.

The recently formed group “Entrepreneurs en Action du Québec (EAQ) filed the appeal, which seeks to obtain “the nullity of decrees declaring the health emergency in Quebec,” just before Christmas.

“‘Since last March, Quebecers have suffered, to varying degrees, attacks on their physical and mental health, not from a virus but from political decisions. The infringements also affect several fundamental rights guaranteed by our Charters,” said EAQ spokesperson Benoit Girouard in a Dec. 21 release.

EAQ is a non-profit association of businesses and self-employed workers representing 2,000 small and medium-sized enterprises (SMEs) across several sectors such as hospitality, travel, and wellness. Their mission is “to defend Quebec SMEs in the face of the government’s excessive containment and hygiene measures.”

The group argues that by using perpetual lockdowns as part of its pandemic response, the Quebec government has not considered the broader implications on “the collective aspect of public health,” and ignored the advice of experts who disagree with lockdowns, including those in fields of public health, virology, and economics. 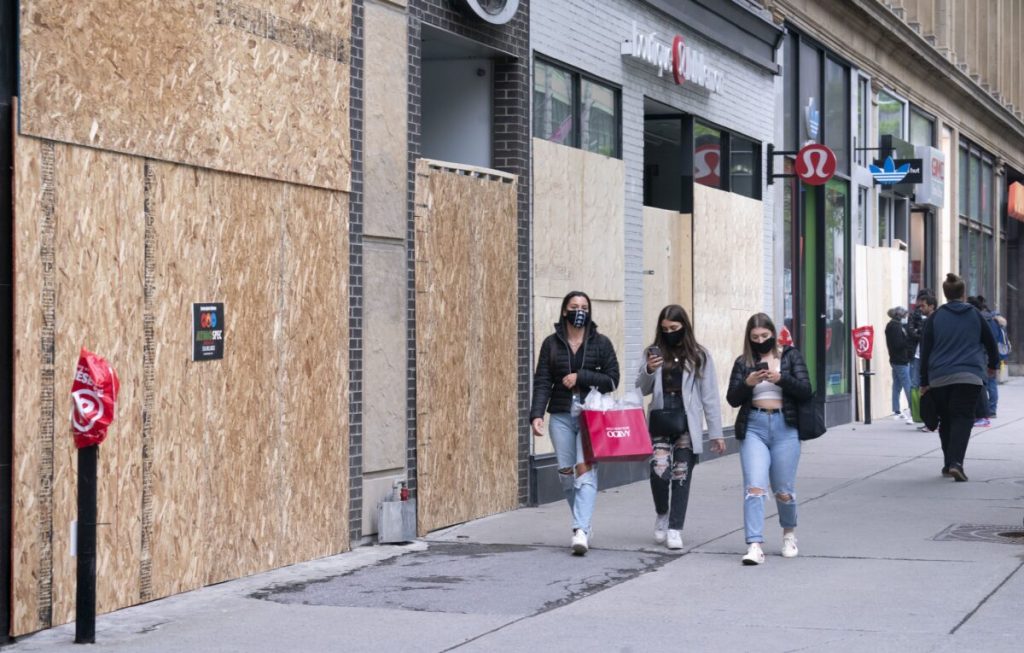 Shoppers walk past boarded up stores on Montreal’s Sainte-Catherine street on Wednesday, June 3, 2020. A number of shops remain closed after being allowed to reopen last week. THE CANADIAN PRESS/Paul Chiasson

In support of their legal argument, EAQ submitted a report (pdf) from experts comparing the harms of lockdowns on the general population to its benefits. The report cited disproportionate long-term damage and deaths from lockdowns, including delays in elective surgeries, childhood vaccinations, and disease screening; the explosion of mental health issues related to social isolation; increases in opioid and drug-related overdoses; adverse effects of school closures on young people; and the risks of widespread economic collapse, among other examples of lockdown harms.

“While the evidence on the benefits of lockdowns is equivocal, the harms of lockdowns are manifold and devastating,” reads the report, which recommends governments abandon widespread lockdowns and instead shift their strategy to an intensive focus on protecting the most vulnerable from COVID-19, including the elderly and those with chronic pre-existing health conditions.

EAQ is also calling for a public inquiry into Quebec’s pandemic management and for a “crisis unit” made up of multidisciplinary experts to be set up to advise the government on its pandemic response.

“This group should be made up of experts representing the physical and mental aspects of public health as defined by the WHO: pediatrician, geriatrician, psychiatrist, health anthropologist, sociologist, virologist-infectious disease specialist, economist, etc,” says the EAQ website.

Much of Quebec has been in the so-called “red” zone since October, the maximum pandemic alert level under which bars, restaurant dining rooms, gyms and entertainment venues are closed. On Dec. 15, Legault announced that all non-essential businesses and all primary and secondary schools would be shut down until at least Jan. 11, as some of the province’s hospitals were reaching capacity amid spiking cases of COVID-19. The premier also moved all the regions that were still under the “orange” alert level to red.

EAQ is also calling for SMEs that were forced to close amid lockdowns after May 2020 to be compensated for their financial losses, based on a percentage of their average turnover for the last three years.

“‘If we are turning to the courts, it is to reestablish a real notion of public health in Quebec. We cannot harm others, especially between generations, in order to correct the shortcomings of our health-care system,” said Girouard.

“I will be satisfied only when Quebec has a group of experts capable of managing pandemics with measures and a collective vision of the health of Quebecers.”

Groups representing gyms and restaurants have also questioned the justification for lockdowns, saying significant outbreaks have not been linked to their establishments, and that the restrictions go too far. The Retail Council of Canada and the Canadian Federation of Small Business (CFIB) both said this week they plan to lobby the government to allow all businesses to have curbside pickup outside their stores, something only essential businesses can currently do.

On Dec. 9, Quebec’s public health director Dr. Horacio Arruda told a legislature committee the decision to order restaurant dining rooms to close in red zones with high infection rates this fall was made by the provincial government, and was not based on recommendations from his office. Opposition parties seized on Arruda’s comments to decry a lack of transparency in the Legault government’s pandemic decisions.

“The comments of Dr. Arruda in recent weeks, confirm that [Premier] François Legault, by imposing the closure of companies that were not targeted by the Director of Public Health, has turned himself into a health expert which he is not,” said Samuel Grenier, a restaurateur who joined the EAQ appeal.

Earlier this month, the CFIB proposed a national plan to relieve the pressure lockdowns put on Canadian businesses. It includes implementing data-driven, science-based policies to limit the spread of the virus; widespread rapid testing and contact tracing; transparent communications and consistent messaging; tailored support for the hardest-hit economically; a well-designed plan for vaccine administration; and a holistic approach to evaluating the costs and benefits of actions to control the disease.

“A plan to replace Canada’s current patchwork approach of reacting to daily numbers is overdue,” says the CFIB website.

“It is neither socially nor economically sustainable to rely heavily on rotating lockdowns while we wait for an effective vaccine to be widely administered in the coming year.”