The World Health Organization’s (WHO) radical Director-General, Tedros Ghebreyesus, set off a firestorm earlier this week when he “mistakenly” said the Covid-19 booster shots are being used to “kill children.”

When speaking about achieving vaccine “equity” in underdeveloped nations, and stressing the need to focus on administering the booster to the elderly and most vulnerable first, Ghebreyesus accidentally said the quiet part out loud.

“We need to always put the equity issue into that factor. Because unless we try tovaccinate the unvaccinated, especially that we are missing because of equity problems, we may not get the desired outcome. It’s not just about booster issues. For instance, some countries are doing boosters very aggressively, while their hospitals are filled with people who are not vaccinated…

…So if it’s [the Covid-19 vaccine and booster] going to be used it’s better to focus on those groups of severe illness and death, rather as we see some countries are using to give boosters to kill children – this is not right.”

And to be clear, if there was any question after watching the video about what the WHO chief says, YouTube’s AI-generated transcript recorded his precise wording, which also concluded that he said the word ‘kill’: 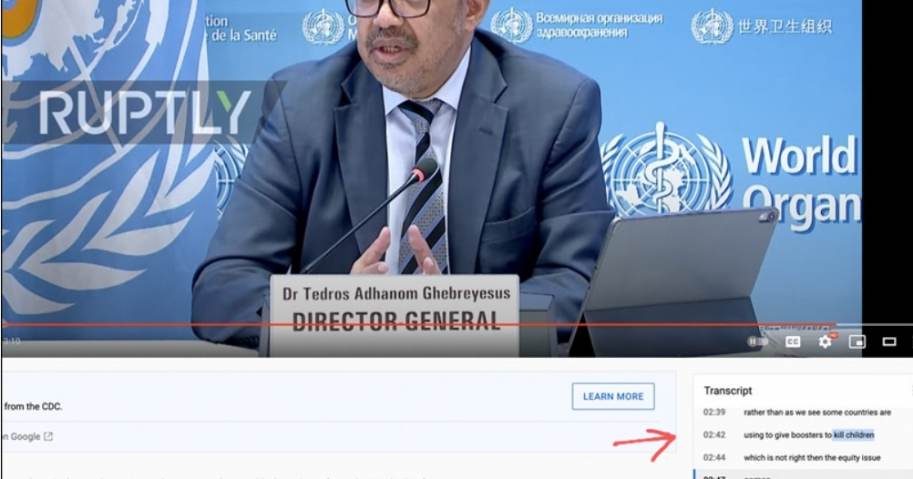 Despite mounting evidence in support of his statement, there is absolutely no way the radical director of the WHO is intentionally admitting that the experimental vaccine is deadly for children.

But that didn’t stop hysterical fact-checkers from immediately springing into action to ridiculously claim that the words never even came out of his mouth (even if we now have legal court ruling that social fact-checkers are admitted opinions only).

From Snopes, who labeled the claim false:

“No, WHO’s Director-General didn’t say Covid vaccines are ‘being used to kill children’

Ghebreyesus stated, ‘It’s better to focus on those [vulnerable] groups who have the risk of severe disease and death, rather than, as we see, some countries are using to give boosters to children, which is not right.’ He stumbled over the word ‘children,’ accidentally pronouncing the first syllable with a ‘k’ sound before immediately correcting himself.

A WHO spokesperson told the BBC, “He repeated the same syllable, with it coming out ‘cil-children.’ Any other interpretation of this is 100% incorrect.’”

The only problem with this SLIP, and the exhausted explanation of the “fact-checkers / opinions“, HE IS NOT READING ANY PROMPTER, therefore it can’t be a miss reading of anything.

In other words: don’t believe your lyin’ ears and eyes!

The WHO even removed the word from the official transcript of the event that was posted online.

This could have easily been explained away without denying the reality of what actually came out of his mouth, but even that cannot be admitted by the establishment, it is too close to the truth.