Rescuers were searching for survivors after the 12-floor building in Surfside, near Miami Beach, collapsed just before 2 a.m. local time, according to one witness speaking to CNN.

“I mean it looks like a bomb went off, but we’re pretty sure a bomb didn’t go off…”

Many local residents and correspondents took to social media to post images of the partly collapsed building.

Miami-Dade Fire and Rescue held a news conference on the scene just after 9 a.m. local time. In addition, it said that “a family reunification center has been set up for anyone looking for unaccounted or missing relatives.”

Resident Kimberly Morales told CNN, “I woke everyone up in the room because when I looked out the window, I saw everyone outside.” She added, “I told everyone to hurry up and leave the building.”

Strangely enough, the collapse of the Surfside Condo looks awfully a lot like the images we’ve all seen so many times from 9/11. Particularly WTC-7, which hasn’t been hit by any plane but had only small pocket fires from the collateral damages of the Twin Towers. As we remember, the Salomon Brothers Building collapsed and imploded into itself later that afternoon in no more than 6 seconds. Still very a mystery today and unexplained by enough by NIST (National Institute of Standards and Technology), who after public pressure and the “Architects & Engineers for 9/11 Truth“, published late 2007 their findings to the collapse of WTC-7, saying it was due to “normal office fires” and leaving everyone unsatisfied with the unscientific explanations.

Meanwhile, in 2005, the Windsor Building in Madrid, Spain, stood tall even after 24h straight of burning flames going more than 1500°F. A hundred firefighters battled to prevent the uncontrollable blaze from spreading to other buildings. The 32-storey tower framed in steel-reinforced concrete showed only its skeleton after the flames finally went out the next day. 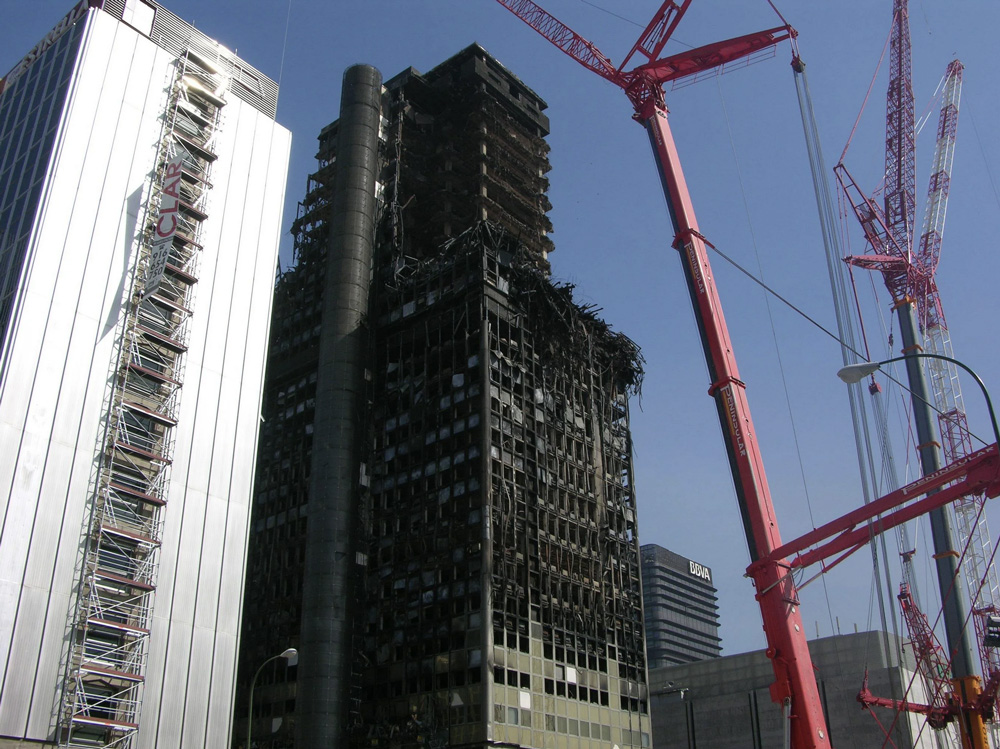 The state’s Division of Emergency Management has also deployed an individual assistance officer and mental health coordinator to assist people impacted by the collapse.

Though the other buildings in the area are so far sound, the town will consider evacuating residents from a “sister building” one block north.