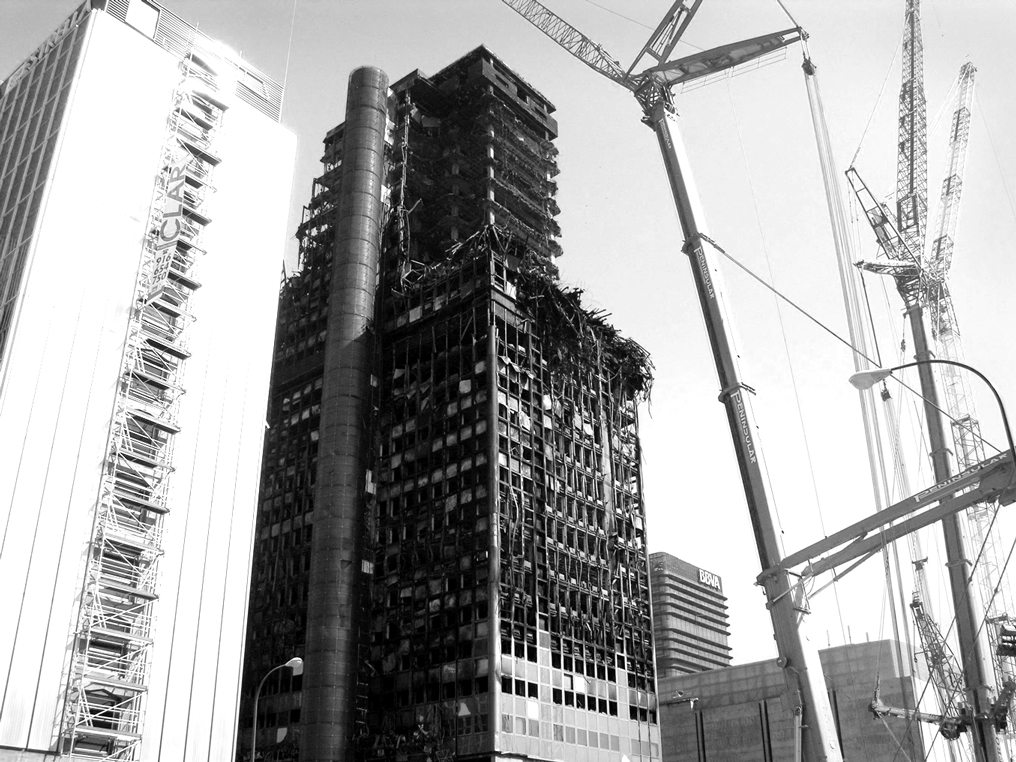 On the night of February 12, 2005, a fire started in the Windsor building in Madrid, Spain, a 32-storey tower framed in steel-reinforced concrete. At its peak, the fire, which burned for almost 24h straight at more than 1500°F, completely engulfed the upper ten stories of the building. More than 100 firefighters battled to prevent the uncontrollable blaze from spreading to other buildings.

During the night the building shredded large pieces, which crashed to the ground.

The fire apparently caused the collapse of the top floor spans surrounding the still-standing core structure of the ten uppermost floors. As in the case of the other large skyscraper fire since 9/11/01, fears of total building collapse in the case of the Windsor fire were widely reported. Those fears would again prove unfounded.

Because the Windsor fire produced a partial collapse, some have argued that it validates the official account of the collapses of WTC Buildings 1, 2, and 7. Because the same fire was so massive and did not produce total collapse, others have cited it as evidence disproving that account. World Trade Center 7, burned for only 5 hours, not hit by any plane, and only reached an estimated 570°F! And yet, it collapsed in a symmetrical fashion into it’s own foot print!

In fact, comparisons between the Windsor tower and the WTC Towers are limited because of the very different structures of these buildings. The Twin Towers and Building 7 were both 100% steel-framed, with large wide-flange columns and box columns, some measuring over four feet wide and fabricated of steel up to five inches thick. Severe fires in other skyscrapers which, like the WTC Towers, were 100% steel-framed, have not produced even partial collapses.

In contrast to the WTC Towers, the Windsor building was framed primarily in steel-reinforced concrete, with columns of concrete reinforced by thin sections of rebar. The concrete pillars in the Windsor building are clearly visible in the photographs showing the intact core exposed by the collapsed facade. The very light construction of the perimeter makes it clear that the core was the main load-bearing component of the building.

Before examining the partial collapse of the Windsor building more closely, we note that steel-framed and steel-reinforced-concrete-framed structures behave very differently in fires. 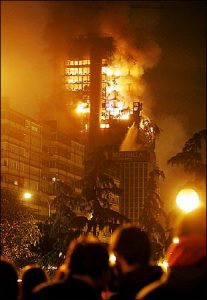 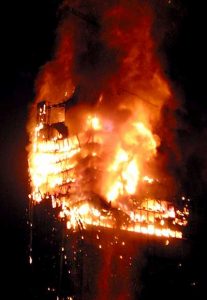 The observation that the Windsor Building is the only skyscraper to have suffered even a partial collapse as a result of fire suggests that the use of steel-reinforced-concrete framing was responsible. A closer look at the incident shows reality to be more complex. The portion of the building that collapsed consisted of the outer portions of floor slabs and perimeter walls throughout the upper third of the building (the 21st through 32nd floors). The outer walls consisted of steel box columns arranged on 1.8 meter centers and connected by narrow spandrel plates. The columns had square cross-sections 120mm on a side, and were fabricated of C-sections 7mm thick welded together. (these had a fraction of the dimensions, and were spaced about twice as far apart as the perimeter columns of the Twin Towers.) The perimeter columns lacked fireproofing throughout the upper third of the Windsor building.

The Windsor Building fire engulfed the upper third of the building, but also spread downward as low as the fourth floor. A report by two fire safety experts in Japan highlighted three causes for the very wide extent of the fire:

The Windsor Building fire demonstrates that a huge building-consuming fire, after burning for many hours, can produce the collapse of parts of the building with weak steel supports lacking fire protection. It also shows that the collapse events that do occur are gradual and partial.

9/11 Facts to Commemorate the 20th Anniversary

12-Story Miami Building: “It Looks Like a Bomb Went Off!”