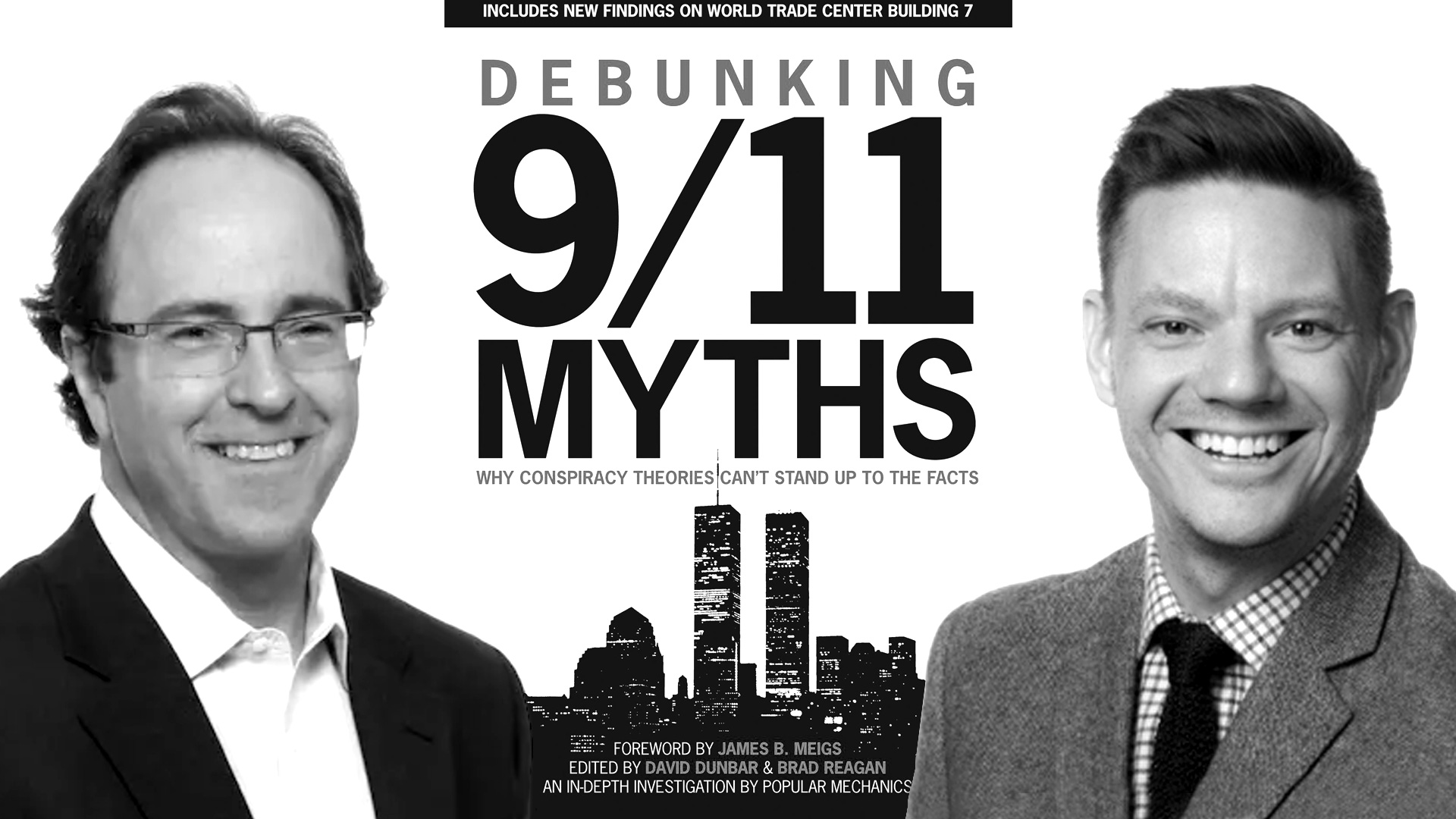 Coburn attempts to defend Popular Mechanics‘s 911 debunkery and alleges the existence of WTC-7 photos which the world is not allowed to see, and which Popular Mechanics did not publish. Coburn also maintains that DNA evidence was used to identify the 9/11 hijackers. 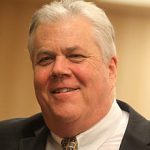 CG: Is there information that has not been given to the public?

PM: Very little… there is very little that has been held back as far as the basic facts of what happened that morning in terms of the material we looked into.

CG: I was under the impression that there were a lot of facts that were withheld. I mean, the surveillance videos, for example, around the Pentagon we were told about: a hotel video, a convenience store video, we haven’t seen those. Apparently they were swooped up very quickly or so the report goes.

PM: That is the case, those have been taken for larger criminal investigations those are now being disclosed to the public, you know with the Judicial Watch material…

CG: I’ve talked with the guys at Judicial Watch, and they’re not very happy about it, they released like four frames that don’t really show much of anything.

PM: They don’t show very much considering that the frame rate was one frame per second and the plane Flight 77 was moving about 780 feet per second, from that distance it’s not surprising that there was not a whole lot caught on that video.

CG: Are you telling me that’s the only video?

CG: What the hell is there to investigate? They told us who the guys were, they held onto some of that stuff for the Moussaoui trial for the love of God, like it was really relevant to his trial (sarcastic), it’s five years later, when are the American people entitled to the evidence?

PM: I think there’s plenty of evidence out there…

PM: Oh sure it makes sense…. The evidence is abundant…

CG: It’s the dog that didn’t bark… We know the evidence we’ve seen, that doesn’t cause any suspicion so much as the evidence that we don’t see. It’s not helpful in this country with a very secretive government when a big, powerful magazine like you guys, who owns Popular Mechanics?

CG: Ok, with Hearst Corporation, with all of your might, instead of joining the people in their natural curiosity to see all the evidence, you try to say, “Oh shut up, you peons don’t know what you’re talking about, everything’s fine, keep on moving, there’s nothing to see here.” Hearst should be using their influence to get all the evidence released and that will end all the conspiracy talk! Wouldn’t it?

PM: (does not answer this question)

CG: …I want to come back to the unseen evidence – the dog that didn’t bark. Hearst has a lot of muscle – where are you in lobbying for the release of all the evidence to put an end to all this madness, speculation and distrust?..

CG: I said use your influence.. Look, is there something we don’t know about this that they have to hide from us? No, or so I presume. We’re told who did it, we’ve invaded two countries in response to it, we’ve spent billions of dollars, I mean, what could be possibly secretive right now?

PM: How can I answer the question?

CG: Because you don’t know, we just want to see the evidence. If the plane flew into the building, show us the damn pictures. What could that possibly hurt?

CG: …Building 7 is the first piece of evidence that I turn to. Popular Mechanics…say that a third of the face, approximately 25% of the depth of the building that was scooped out beforehand.

PM: When the North Tower collapsed… there was damage to Building 7…. What we found out was…about 25% of the building’s south face had been carved away from it… Each column that you remove that was destroyed by the wreckage from the North Tower…

CG: That would be very persuasive to me if it were true. And it may or may not be true… I go, oh that’s interesting…if that’s true that would go a long way towards explaining what happened to Building 7. So I turn to the pictures in your book about Building 7 you’ve got a picture of Building 7, but it doesn’t show that. So I’m going, OK, instead of just somebody asserting that a third of the building was scooped away, show me the picture. But you don’t show me the picture.

PM: …We have seen pictures that are property of the NY Police Department and various other governmental agencies that we were not given permission to disseminate…

CG: Popular Mechanics got to see them, but the average American citizen can’t see them.

PM: Just what was described.

CG: Well it must be something that’s dangerous for me as an American citizen or a voter to see. You’re publishers, if anybody is concerned about evidence in a criminal case or something, they’ve done the worst possible thing, they’ve shown it to a damn magazine publisher!

PM: That was done for the purposes of our background research.

CG: What about my background research? Do you see the source of my frustration here? I didn’t know we had different classes of citizens. You can’t tell me it’s because it’s a criminal case because they’ve shown it to a damn magazine publisher.

PM: …I can’t answer that question.

…Caller (Mike): What about the 7 to 9 hijackers that were reported in the British press who came forward and said, “We’re alive, what are we doing on the FBI list of so-called hijackers? We’re alive and well.” How do you explain that one?

PM: It was one BBC report – I am saying that is false.

Caller: How did you verify that the British story was false?

PM: The remains of the hijackers who have been widely understood to have been on those planes…

PM: There was DNA evidence collected all over the place.

Caller: The building was incinerated; the concrete was turned into powder, there were molten pools of steel in the bottom of the building that were still hot weeks after, and they were able do autopsies on bodies? Are you insane? Where are the autopsy reports you were referring to, on the hijackers, where are those reports? I haven’t heard anything about autopsy reports.

PM: Off the top of my head, I don’t know the answer to that.

CG: Of course you don’t.

CG: Is that a promise?

CG: People all across the state of Arizona now are hearing Davin Coburn say on the show that he’s gonna find out how they got that DNA checked against those Islamic terrorists who had…hijacked those planes. Good, I’d like to hear it. Now do you understand why people scratch their head when these kinds of representations are made?

CG: You don’t understand why when you tell us that they found the hijackers’ DNA remains amongst the molten steel, and I ask you where did they get the original DNA from the hijackers to match it against – Do you think that’s bizarre to ask a question like that, do you think it’s conspiratorial just to want to know?…You told me that they have DNA evidence that matches the hijackers

PM: I think the entire question is baseless. I think that it is not even a question that’s worth answering…

CG: …You’ve told me that they checked their DNA, where did they get their original DNA to check it against? You’re the one with the answers, I’m not. I just ask questions.

CG: No, this is the worst attack on America in the history of this country, we’ve invaded two countries, maybe a third because of it, we’re gonna spend trillions of dollars. It’s not a seven year old asking why, I want to know where they got the evidence that they matched it against. What’s so hard about that?

PM: The way that you’re framing it is intentionally

CG: Of course it is, ’cause it’s five years later and we haven’t heard the answer. And you haven’t given it to us in Popular Mechanics. I swear to God, that’s it. You see, it’s the way I’m framing it makes it an illegitimate question? Well tell me how to reframe it, tell me how to ask it differently.

PM: I would start entirely over with the question that that gentleman asked.

CG: I want the question I asked. All right, that’s it. Hey Davin, thanks… the Charles Goyette Show. 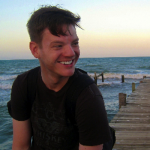 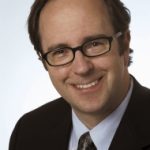