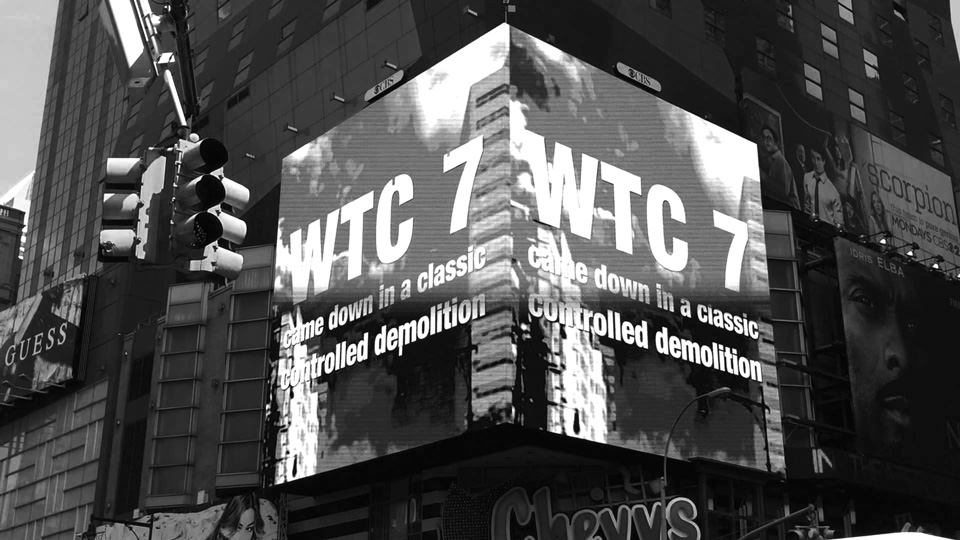 Beginning today, the organization Architects & Engineers for 9/11 Truth has placed a massive, 45-foot video billboard of World Trade Center 7’s destruction in Times Square which is timed to run for the 13th anniversary of 9/11 and on through October 5th. Against a backdrop of WTC-7’s repeated freefall, the words “5:20 PM on 9/11, WTC-7 came down in a classic controlled demolition. The government says fire brought it down, but anyone who watches the video can see otherwise” will appear. The 15-second spot will air every two minutes for four straight weeks.

An estimated 105,000 people a day will see the video. “AE911truth” ran a similar ad earlier this year in Toronto’s subway system, in Canada.

Polls have shown that a third of New Yorkers and half of all Americans are still unaware that WTC building 7, aka the Salomon Brothers Building, was even destroyed on 9/11.

The response was excellent and the exercise very effective in reaching average people. The assorted 9/11 truth groups have a whole schedule of events planned to take advantage of this time of mourning, including a protest at the World Trade Center site.

Architects & Engineers screened the documentary Anatomy of a Great Deception, in which director David Hooper details how his obsession with 9/11 ruined his marriage—he made this movie and got his wife back. The cherry on the cake for the weekend is their petition to Congress “to uncover the full truth of events surrounding 9/11/01.”

Any member of the public who wants to sign the petition must provide a “Relevant Biography” and a “Statement About 9/11 Skyscraper Destruction.” Their hope is to inspire a thorough audit of the true events of the day.