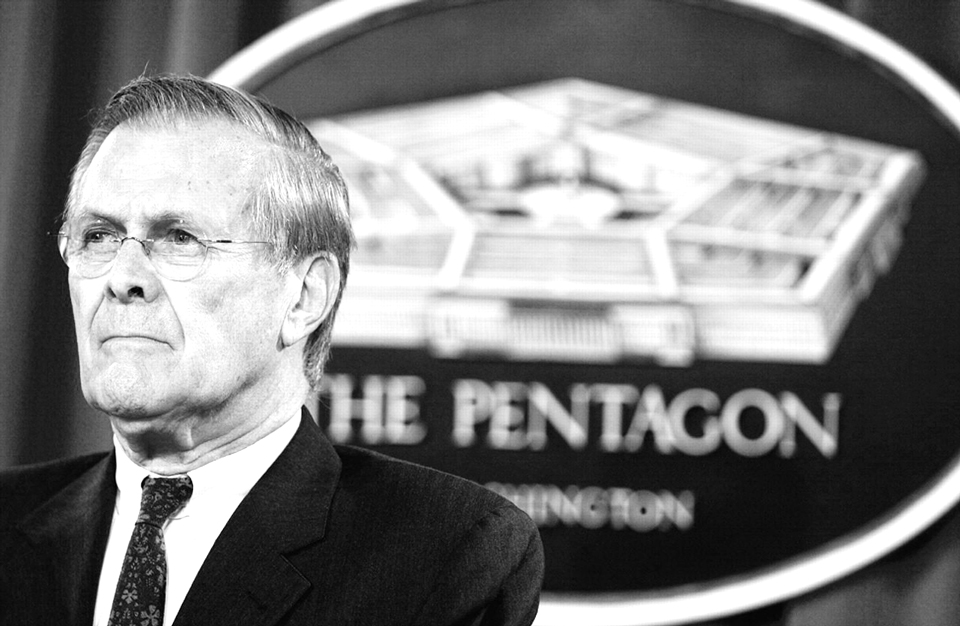 Cynthia McKinney:   Thank you Mr. Chairman. Mr. Secretary, I watched President Bush deliver a moving speech at the United Nations in September 2003, in which he mentioned the crisis of the sex trade. The President called for the punishment of those involved in this horrible business. But at the very moment of that speech, DynCorp was exposed for having been involved in the buying and selling of young women and children. While all of this was going on, DynCorp kept the Pentagon contract to administer the smallpox and anthrax vaccines, and is now working on a plague vaccine through the Joint Vaccine Acquisition Program. Mr. Secretary, is it [the] policy of the US Government to reward companies that traffic in women and little girls?

That’s my first question. My second question, Mr. Secretary: according to the Comptroller General of the United States, there are serious financial management problems at the Pentagon, to which Mr. Cooper alluded. Fiscal Year 1999, $2.3 trillion missing. Fiscal Year 2000, $1.1 trillion missing.

And DoD is the number one reason why the government can’t balance its checkbook. The Pentagon has claimed year after year that the reason it can’t account for the money is because its computers don’t communicate with each other.

My second question, Mr. Secretary, is who has the contracts today, to make those systems communicate with each other? How long have they had those contracts, and how much have the taxpayers paid for them?

Finally Mr. Secretary, after the last Hearing, I thought that my office was promised a written response to my question regarding the four wargames on September 11th. I have not yet received that response, but would like for you to respond to the questions that I’ve put to you today. And then I do expect the written response to my previous question … hopefully by the end of the week.

Rumsfeld: Thank you, Representative. First, the answer to your first question is, no, absolutely not, the policy of the United States Government is clear, unambiguous, and opposed to the activities that you described. The second question

McKinney: Well how do you explain the fact that DynCorp and its successor companies have received and continue to receive government contracts?

Rumsfeld:  I would have to go and find the facts, but there are laws and rules and regulations with respect to government contracts, and there are times that corporations do things they should not do, in which case they tend to be suspended for some period; there are times then that the … under the laws and the rules and regulations for the … passed by the Congress and implemented by the Executive branch … that corporations can get off of … out of the penalty box if you will, and be permitted to engage in contracts with the government. They’re generally not barred in perpetuity …

McKinney:  This contract … this company … was never in the penalty box. If you could proceed to my second question, please.

Tina Jonas:  Thank you Ms. McKinney. I appreciate the question and I appreciate your interest in our Department’s financial condition. We are working very hard on that program. I’ve just come back, recently …

McKinney:  I understand that you’re working hard on it, but my question was who has the contract? How long have they had that contract, and how much money have we spent on it?

Tina Jonas:  There are – In general we spend about $20 billion dollars in the Department on information technology systems. The accounting systems are part of that. I can get you the exact number for the record, of what we spend on our current, what we call ‘legacy systems’, and those that we’re moving toward.

McKinney:  And who has the contract?

Tina Jonas:  That would be a multitude of individuals that have

McKinney:  Could you name some, please?

Tina Jonas:  Well, I think of the top of the, off the top of my head, well, I would rather not; I’d rather provide that for the record.

McKinney:  That’s not privileged information, is it?

McKinney:  Well, please. We still have time, so, please.

Tina Jonas:  I would be glad to provide for the record; I don’t want to talk from the top of my head and be incorrect.

Rumsfeld: On your first question, I’m advised by Dr. Chu that it was not the corporation that was engaged in the activities you characterized but I’m told it was an employee of the corporation, and it was some years ago in the Balkans that that took place.

McKinney:  It’s my understanding that it continues to take place, and that …

Rumsfeld:   Is that right?

Rumsfeld:   Well if you can give me information to that effect, we will

McKinney:  I’m sure you are interested in all of the information that I have and I’ll be more than happy to provide it to you.

McKinney:  But I would also like to get information from you, for example, the information that I just requested about who has those contracts.

Duncan Hunter:  Let me assure the gentlelady that we’ll make sure that this exchange of information takes place and that, Mr. Secretary if you can get back with us on the DynCorp …

Duncan Hunter:   … story, we’ll get that to the gentlelady.

DoD and the Pentagon Admit to 9/11 Wargames

Rumsfeld:  We’ll get back on both of the first two questions but the Congresswoman has raised the other question twice now, and I’d like to have General Myers respond, because you mentioned it in the last Hearing and I think it’d be helpful to get the answer even though we’re on red, if you don’t mind, Mr. Chairman?

McKinney:  But I would like to have the answer in writing as well, as I thought my office was promised.

Myers: Okay I don’t know about the promise, Congresswoman, but could you repeat the question to make sure I’m answering the right question; this is a 9/11 question.

Gen. Richard Myers:  The answer to the question is no, it did not impair our response, in fact General Eberhart who was in the command of the North American Aerospace Defense Command as he testified in front of the 9/11 Commission I believe – I believe he told them that it enhanced our ability to respond, given that NORAD didn’t have the overall responsibility for responding to the attacks that day. That was an FAA responsibility. But they were two CPXs; there was one Department of Justice exercise that didn’t have anything to do with the other three; and there was an actual operation ongoing because there was some Russian bomber activity up near Alaska. So we –

McKinney:  Let me ask you this, then: who was in charge of managing those wargames?

Duncan Hunter:  General, why don’t you give the best answer that you can here in a short a period of time and we’ll – the gentlelady wants to get a written answer anyway, and then we can move on to other folks.

Gen. Richard Myers: The important thing to realize is that North American Aerospace Defense Command was responsible. These are command post exercises; what that means is that all the battle positions that are normally not filled are indeed filled; so it was an easy transition from an exercise into a real world situation. It actually enhanced the response; otherwise, it would take somewhere between 30 minutes and a couple of hours to fill those positions, those battle stations, with the right staff officers.

Gen. Richard Myers:  I have to look back; I do not know. Do you mean after the fact, or

McKinney:  No. Because of the activities going on that had been scheduled at the United Nations that day.

Gen. Richard Myers:  I’d have to go back and check. I don’t know.

As of publication date, no written report on the wargames has been produced by the Dept. of Defense or the Pentagon.